August 24, 2018
The Happytime Murders is a film produced by the Jim Henson Company. The film, part of the company's Henson Alternative brand, was first announced in October 2008. The Happytime Murders, an irreverent puppet comedy, plays on the classic film noir detective genre.[1] The film is distributed by STX Entertainment for the theatrical release while Universal Home Entertainment distributes the home video release.

The film was released on August 24, 2018 in the United States and Canada to negative critical reviews and is considered to be the one of the worst films ever made.

The film is based on an original story by Todd Berger and Dee Robertson; with the screenplay penned by Berger. The film stars Melissa McCarthy, Bill Barretta, Maya Rudolph, Joel McHale, and Elizabeth Banks.

The film received six nominations at the 39th Golden Raspberry Awards including Worst Picture and Worst Actress for McCarthy, winning the latter award.

“ In a world where puppets co-exist with humans as second class citizens, puppet private eye and disgraced ex-cop, Phil Phillips, is hot on the trail of the serial killer who murdered his brother and is now targeting the cast members of the famous 90s television show, "The Happytime Gang." As the killings continue, Phil’s former flame, Jenny, is next on the list. It’s up to Phil and his ex-partner, Detective Edwards, to find the culprit, but as bad blood and old resentments resurface the clues start pointing to the only viable suspect, Phil himself. Now he's on the run with only his wits and hard headed determination, as he tries to solve, "The Happytime Murders." ” 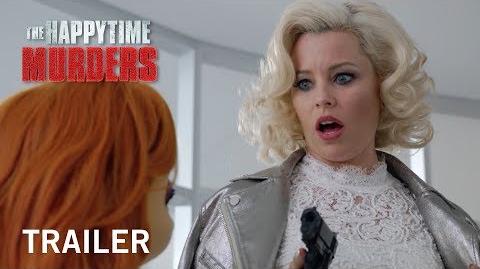 The Happytime Murders "For Your Consideration" Trailer In Theaters August 24, 2018 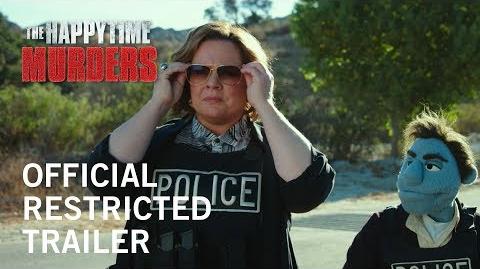 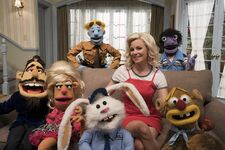 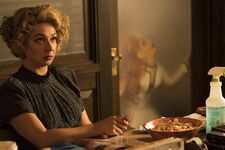 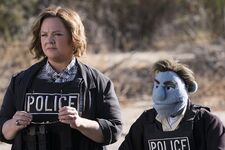 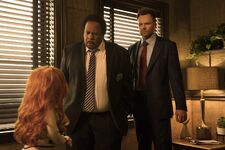 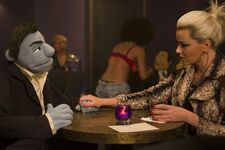 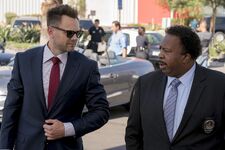 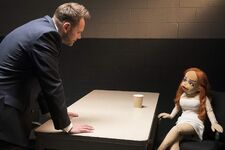 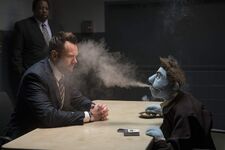 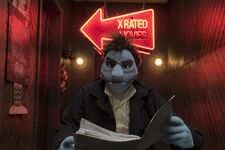 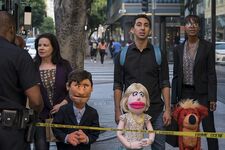 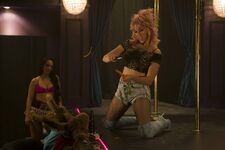 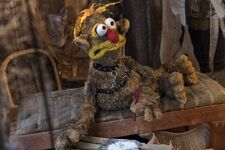 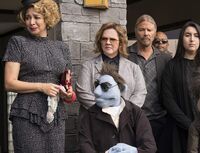 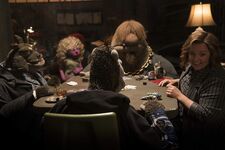 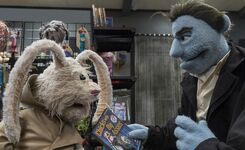 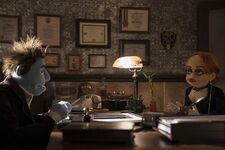 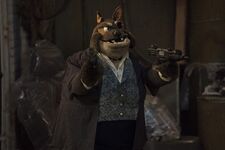 In early 2009, Lisa Henson commented on the project, and the prospects of future Henson Alternative feature films, stating:

“ It's an adult puppet movie. It's going to be a film noir starring a puppet detective and basically it’s a spin-off of our theatre franchise Puppet Up!... We loved the live shows so much that we were trying to figure out what we wanted to do to go to the next level with that kind of comedy. So we want to do a series of Puppet Up! films which would all be in different genres. So this would be film noir detective, and if we do another one it won't be that genre – it would be a teen comedy, or a sci-fi, or something like that. So we would use the Puppet Up! improv style to do different genres.[2] ”

In October 2010 it was announced that the project had been picked up by Lionsgate, with insiders talking about a possible January 2011 production start.[3]

The initial announcement described the film as:

“ Featuring the well-known Henson style of irreverence and parody, and taking its cues from such films as Pulp Fiction and LA Confidential, "Happytime Murders" presents a twist on the film noir genre. In a world where puppets are a minority race amongst humans, a puppet detective is forced to solve a string of murders around The Happytime Gang, the cast of a beloved children's show, that is being picked off by a mysterious villain. ”

Brian Henson commented in 2011 that the film was still in development, and that the Henson Company hoped to start shooting in the Spring of 2012. He revealed the series takes place in a world where the puppets are a minority group, and that the main character is a detective that once worked for the LAPD, but was fired.

IM Global sold the film through its Opus label at Berlinale in February 2012.

Todd Berger commented on the script and pre-production in a June 2012 interview, saying:

“ I want to try to make the Heat of puppet movies. I want to be The Dark Knight or Heat but in a world where puppets and humans coexist. Brian [Henson] was like, "This mystery actually needs to be interesting so that even if you took all the comedy out of it, it's still going to be interesting to watch"... Brian has actually already been working on the main character puppet. The Creature Shop has already made a few test puppets that I've met in person that are amazing... It’s a movie in which puppets and humans coexist and a lot of the supporting characters are all puppets. So they have a puppet improv group called Stuffed & Unstrung that tours around America doing improv shows. They’re going to use a lot of those puppets but they’re also going to create a bunch of new ones. There's a whole cast of characters in the script that they're going to create from scratch... It is a full-on R - there is swearing, there’s sex, violence, murder. Maybe with some work it could be PG-13 but as of now we've embraced the R rating.[8] ”

Lisa Henson spoke of the film at the National Puppetry Festival in 2015, claiming the film was still looking for a producer: she cited the main issue of getting the film produced was that though people who read the script (like Paul Giamatti) loved it, those who did not were skeptical of an R-rated puppet film. Shortly after this, STXfilms bought the script.

After years of silence, it was announced on May 3, 2017 that comedian Melissa McCarthy had signed on to the film as the human detective (the role apparently having changed genders since the original concepts), as well as taking a producer role alongside her husband Ben Falcone. After almost a decade in development, the film began production in August 2017.[9]

On September 13, 2017, it was announced that Elizabeth Banks had joined the cast as burlesque dancer Jenny. It was also confirmed that Bill Barretta would be the performer for the main character Phil Phillips.[14]

On May 18, 2018, the first trailer was released before selected screenings of Deadpool 2 and online. 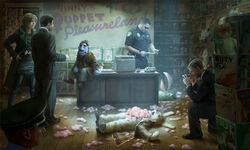 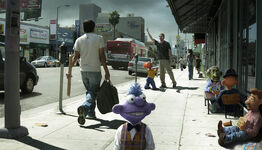 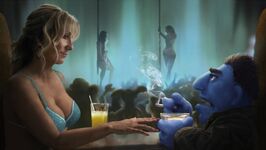 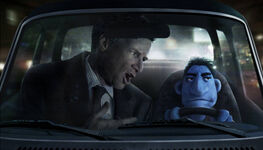 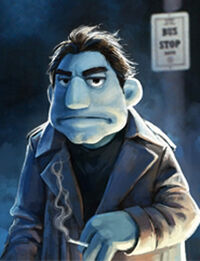 On May 2018, it was reported that Sesame Workshop had sued STX Entertainment for the tagline for the marketing of The Happytime Murders which is No Sesame. All Street. This is because Sesame Workshop feels it is damaging the Sesame Street brand.[18] Sesame Workshop eventually lost the case.

Afterward, in one of the TV spots, the film was jokingly introduced as being "From the studio that was sued by Sesame Street..."