Phil Phillips is the main protagonist in the film The Happytime Murders.

An alcoholic, foul mouthed disgraced puppet ex-cop who now works as a private investigator, Phil is looking for a serial killer who is murdering the puppet cast members the 80's children's show The Happytime Gang (one of which was his brother) and his "former flame" Jenny (Elizabeth Banks) is next on the list. But as he tries to find the culprit, the clues start pointing to Phil himself, making him look like the only possible suspect, so he has to find the real killer before the FBI (or as he jokingly calls them, the "F**king Big Idiots") catches his tail. But he can't do this alone, so he (reluctantly) teams up with his human ex-partner Connie Edwards (Melissa McCarthy) as they try to solve the Happytime murders, while at the same time resisting the urge to murder each other.

After being inspired by Murder She Wrote, Phil Phillips decided to become a police officer. Phil was the first puppet to become a cop, and at one point was recognized as the LAPD's best marksman. He was often partnered up with fellow officer, Connie Edwards and the two were the best in the business according to Lt. Banning. He also had a brother named, Larry, an actor who played a police officer on the ground-breaking television series, The Happytime Gang. Phil, however never saw his brother's profession as a "real job."

During the series run of The Happytime Gang, Phil was very close to his brother and the rest of the main cast, often partying with them, and even bringing Connie along. One cast member that he was particularly close to was Jenny Peterson who he met at The Formosa Cafe on his brother's birthday and the two began a relationship. Once The Happytime Gang was cancelled, and Jenny took up burlesque dancing, Phil continued to date Jenny before the two ultimately broke up. Yet despite this, Phil continued to look out for his ex in the best of ways. In a deleted scene, Phil is shown bringing Jenny lunch during her break (though the commentary revealed the "ham and cheese" was supposed to be money stolen from the puppet poachers) and encouraging Jenny to do more with her life than strip. Jenny however blew this off (most likely due to her relationship/arrangement with Sandra).

Twelve or twenty years prior to the events of the film, Phil's police career came to a crashing halt when a puppet perpetrator held Connie at gunpoint and started tormenting Phil about working with humans and arresting puppets. Connie encouraged Phil to "take the shot," but Phil missed his mark and ended up shooting and killing civilian, Jasper Jacoby right in front of his young daughter, Sandra. Connie disarmed the perpetrator, but was shot in the middle of doing so. Yet despite this, Connie was still able to shoot and kill the perpetrator before he got away. Phil Phillips then reported the situation and rushed Connie to a nearby hospital where it is revealed that the bullet went through her liver. Unfortunately, the hospital only catered to puppets, and the doctor present was doubtful about performing any kind of surgery on a human. But Phil held the doctor at gunpoint and insisted that he save Connie's life. Connie was then given a puppet liver, which resulted in her having both an identity crisis, and a sugar addiction. Phil was then taking to court regarding these events, where Connie threw him under the bus and claimed that Phil "deliberately" missed his mark. The trial resulted in Phil getting stripped of his badge, and the installation of "The Phillips Code" a government law forbidding any more puppets from becoming police officers.

Following the loss of his job, Phil Phillips became a private eye, and hired a secretary named, Bubbles. He did so in order to continue to "protect the felt" of Los Angeles, as "God knows no one else is."

Role in The Happytime Murders[]

The LAPD arrives and Phil meets with his former partner Detective Connie Edwards. Edwards believes it was a robbery gone wrong. Phil believes it was murder, since no money was taken. That night, Phil's brother Larry "Shenanigans", a former Happytime Gang cast member, is torn apart when someone lets dogs into his house. Phil reluctantly joins forces with Edwards to find the killer. The two track down former Happytime Gang cast member Lyle only for him to be killed in a drive-by shooting in front of Phil. Phil later returns to his office to find Sandra in there again. She tells Phil that the person harassing her has sent her another note, along with a picture of her with Jenny, the only human member of The Happytime Gang and former girlfriend of Phil. The killer threatens to expose something involving Jenny and Sandra. After asking for Phil's help, Sandra seduces him and they have sex in his office as Banning arrives with FBI Agent Campbell. After Phil blows his silly string load and Sandra leaves, Campbell tries to chew Phil out for his failure in stopping the killer.

Phil goes to find Jenny at a puppet strip club where she works. She claims to not know Sandra, but she regrets that it didn't work out between her and Phil. He walks her outside to her car before they part ways, but the car explodes and apparently kills her. The police arrive and see Phil, believing him to be responsible for Jenny's death. Phil goes to Edwards' apartment, where she is passed out from having too much sugar. After she wakes up, Phil asks for her help and they discover that former Happytime Gang cast member Goofer has apparently overdosed and drowned. The two head to find the two remaining Happytime Gang cast members, Ezra and Cara, also known as the Kissing Cousins. Phil and Edwards head to their house and find their creepy deformed children before coming across Ezra and Cara's mangled bodies on the bed. The killer gets away, and Campbell shows up with other agents to arrest Phil and Edwards. Phil is shown Sandra in an interrogation room. She reveals that she and Jenny are married and claims Phil killed Jenny and the others to keep Sandra for himself. Phil gets sent to jail as Banning also now believes that he committed the murders. Phil gets attacked by a few of his cellmates. The guard tells them to knock it off and reveals that Phil has a visitor. That visitor is Edwards who reveals that she knows that Sandra is the killer, but all the evidence she had on her got burned in a fire. Edwards now has a plan of busting Phil out of jail by shooting him in the arm.

In an ambulance, Phil is treated by an anti puppet EMT, who Edwards chloroforms while Phil gets out of his handcuffs. Edwards then chloroforms the driver too. Phil and Edwards race to the airport, where Sandra is planning to escape with all the money. They get there fast and Phil handcuffs Edwards to the steering wheel so he can do this alone. Phil runs up to Sandra and tries to apologize for killing her father, saying it has haunted him all those years and asks why the Happytime Gang had to die. Sandra says she wanted Phil to suffer as payback. It also turns out Jenny is alive and in on the scheme with Sandra. Jenny has a gun and makes Phil drop his. Jenny stands next to Sandra and she wants her to kill him. Jenny second guesses this idea so Sandra just knocks her out with a briefcase and has her security take Phil away to take care of him. The security tries killing Phil by throwing him into an engine, but Edwards breaks out of her handcuffs and saves him. Sandra holds Edwards at gunpoint, putting her and Phil in the same position as before. Phil takes his shot and doesn't miss this time, killing Sandra. Banning arrives to congratulate Phil and Edwards on cracking the case. He reinstates both of them to their old jobs. Phil also asks Bubbles out on a date, and she accepts.

Performed by Bill Barretta, Phil has blue skin, teal eyelids and slightly grizzled black hair and eyebrows. He is typically seen wearing a white undershirt under a another white shirt under a black jacket and a black belt and sometimes a pair of sunglasses. In some scenes where his legs are shown (i.e. the scene where he is shown stomping on a man's family jewels) he is seen wearing dark blue pants and black shoes, and is sometimes seen smoking a cigarette. Six puppets of Phil were built for different scenes in the movie, one of them was even made for an underwater scene, which is really difficult because puppets soak up a lot of water. 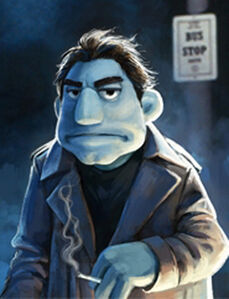 Some of his family members besides Larry have been mentioned. He once stated in an interview with MTV International that he has an uncle named Jerry. His mother was also mentioned twice. In "The Happytime Murders" where Connie joked that she "unsewed his mother and made a jacket out of her." She was mentioned again in an interview with HeyUGuys where he stated that she and Phil's next-door neighbor have been stealing his newspapers every morning. In the same movie he also mentioned having an aunt named Ruby, who died in a Zamboni accident.

His favorite song is "Havana" even though he's not really into modern music.