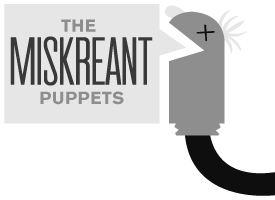 The Jim Henson Company's Stuffed and Unstrung features a mixture of comedic improvisation and puppetry, as such the show features a large cast of puppets.

Early on the improv show of the company's Puppet Up! - Uncensored featured many puppets recycled from past Henson Company projects. These puppets came from a variety of previous projects including Jim Henson's Animal Show, City Kids, Animal Jam, and others. Although a puppets have had a pre-existing life, the characters (the personality, voice, performer, role and name) did not stay attached -- and the puppets appeared as new characters, usually created on the spot.

As the show grew and evolved, new and original puppets joined the show. In 2006 dozens of new puppets were designed to be used in the show. These original puppets were designed by Julianne Buescher and Drew Massey; and built by Buescher, Massey, Patrick Johnson, and Sean Johnson with help and guidance from veteran Muppet designer/builder Jane Gootnick.

Many of the puppets associated with the "Muppets" are no longer used on the show as they were seized by Disney for their status as "Muppets."

In 2011, the Jim Henson Company branded the group of puppets used in the Henson Alternative shows as the Miskreant Puppets (a brand trademarked by the company in May 2011).[1]

Jim Henson's Creature Shop maintains more than 80 puppets in performance conditions for Stuffed and Unstrung; many of these puppets have also appeared in other Henson Alternative projects.

Yodita
Add a photo to this gallery

Retrieved from "https://henson-alternative.fandom.com/wiki/List_of_puppet_improv_puppets?oldid=10223"
Community content is available under CC-BY-SA unless otherwise noted.