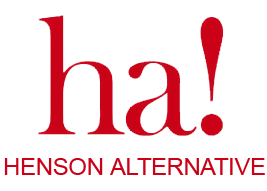 “ "Henson Alternative" is a title that lets our audience know that what they're watching is not intended for our youngest viewers. Most people know the Henson Company for their successful work with The Muppet Show and Sesame Street, but we have a number of shows that are geared towards older audience members. ”

Under the leadership and direction of Brian Henson, the Jim Henson Company began developing adult-comedy content in 2005. After the sale of The Muppets to the Walt Disney Company, the company assessed new and potential areas for future development and focus. Brain Henson stated in a 2006 interview that "we lost our position as funny, popular entertainment in the prime-time arena, so I'm trying to get back there. To do that and be innovative, we have to really establish a new voice."[2]

However, Henson Alternative was not the first time the Henson Company sought an adult audience. Many of Jim Henson's early projects were very risqué and adult in nature - such as Time Piece, The Cube, The Land of Gorch, and Sex and Violence. As Brian Henson reflected "because of Sesame Street people thought of [Jim Henson] as a children's performer. It was sort of odd for him because he was until then an adult performer."[2]

When developing this new direction, Henson stated that "[We are] starting to develop more comedy that's a little rough around the edges, kind of like Muppets in the early days but with a modern sensibility." [3].

“ If you look at the original Muppet comedy, the Muppet comedy came from vaudeville, and then vaudeville became television variety shows, and The Muppet Show was borrowing heavily from that tradition of vaudeville and then variety comedy. Presently, what I was trying to do was to look for what’s in contemporary, funny, comedic voice and tone and energy for puppets that wasn’t sort of borrowing from modern sitcoms, which never felt right. ”

Henson was not purposefully forcing the content and focus to go "off-color" or become risqué for the sake "shock comedy" or simply polarizing or reaching to capture a specific demographic, but rather explained the shift of focus as doing what they, as performers, found entertaining. Brian Henson commented on the development saying, "we didn't set out to do risqué adult-exclusive content. What we did set out to do is to forget all the rules of the 8 p.m. sensibility, what puppets do that aren't in preschool, and instead let's just do what we as puppeteers think is the funniest thing we can do in the moment."[2]

“ In terms of The Jim Henson Company, my dad first started with adult-minded comedies very early on. He also worked in an era where most of the airwaves were highly censored. But he was always a very naughty, irreverent performer and this basically captures that same level of naughtiness and irreverence, but in a contemporary setting. Having said all of that, I think it's very important that everybody always knows that this is for adults only. This is our opportunity to let our hair down and get crazy every now and then, even though generally we are very safe with the material we do. ”

The first projects realized under the Henson Alternative banner was Puppet Up! - Uncensored, a live improv show which launched in 2005 and led to a television special on TBS, a web series on TBS.com and an exclusive film for the Center for Puppetry Arts. The show later spawned Stuffed and Unstrung, another improv puppet stage show which premiered in New York City in spring 2010.

The company developed and piloted a late night talk show entitled The Late Night Buffet with Augie and Del for TBS. Like most late-night talk shows, "Late Night Buffet" was not geared towards children and the comedic tone was more adult-oriented; as such, all members of the live studio audience were required to be over 18. While the pilot remains unseen, the character of Del went on to star in five original webisodes of Del's Vegas Comedy Binge for TBS.com in November 2007.

The company also produced the adult-oriented comedy series Tinseltown for the Logo Network. Tinseltown stars two homosexual puppets – Bobby Vegan and Samson Knight - in a faux-reality series. The show began development in 2006 and the pilot episode its television debuted on November 2, 2007. While the series was not picked up for more episodes, the characters of Bobby and Samson lived on. The couple hosted a special tour video created for the "Adventures by Disney" tours of the Henson Studio lot and they starred as the fictional producers of the 2010 stage show Stuffed and Unstrung.

In 2007 Henson partnered with Warner Bros' Studio 2.0 to develop "alternative comedy" webseries. These projects include a monkey detective comedy entitled The Simian Undercover Detective Squad; a puppet reality-show spoof known as Alt/Reality and a full series adaptation of the company's Puppet Up! improv show.

In 2008 the company announced that it was producing a puppet based film noir parody under the Henson Alternative banner. The film, entitled Happytime Murders, will feature a puppet detective who is forced to solve a string of murders involving The Happytime Gang, the cast of a beloved children's show. In early 2009 Lisa Henson commented on the project, and the prospects of future Henson Alternative feature films, stating:

“ It's an adult puppet movie. It's going to be a film noir staring a puppet detective and basically it’s a spin-off of our theatre franchise Puppet Up!... We loved the live shows so much that we were trying to figure out what we wanted to do to go to the next level with that kind of comedy. So we want to do a series of Puppet Up! films which would all be in different genres. So this would be film noir detective, and if we do another one it won't be that genre – it would be a teen comedy, or a sci-fi, or something like that. So we would use the Puppet Up! improv style to do different genres. ”

In 2011, the Jim Henson Company partnered with the Nerdist to create exclusive YouTube content. The first of which, Marvin E. Quasniki for President, was released in December 2011.